Tickets, still out of time and still as popular

Just how preposterous is Tickets? It’s been open three years now and it still takes some serious string-pulling to get a table. From the bell-boy uniforms (the door-girl wears a ringmaster’s topper), to the three-language menus, our waitress’s opaque patter, and the carefully-created air of controlled mayhem, the place has the feel of a chaotic pantomime in a provincial theatre.

The décor is a jaunty post-retro hotchpotch of big top and music-hall: brickwork, a 1960s bare-bulb cinema marquee above the bar, 19th-century playbill menu graphics – all cheekily ironic. There’s even a hint of send-up in the wait staff’s greeting,‘Hi, I’m Beatriz and I’m here to look after you this evening’.


So there you sit, trying to make sense of it all, getting nowhere with the menu and its daft divisions – so what is the difference between tapa and finger-food, and how big is this dish, and what the hell is an airbag baguette anyway? And there’s a guy in the middle of the room dressed like a flunkey doing something with dry ice (and dry ice is as dated as Gordon Ramsay’s swearing). After five minutes of Alice-in-Wonderland back and forth with Beatriz– she’s explaining spherification and thinks we’re being wilfully dim – she says, ‘why don’t we start with the olives?’ and we snap our menus shut and settle back to enjoy the Cava.

Tickets, the brainchild of the Adrià brothers – Ferran (of El Bulli Foundation and whose late restaurant was just up the coast in Rosas), and Albert, who have said the time for high-concept fine dining is past – opened in 2011 and is still the hottest molecular bar in Barcelona. It’s supplanted the achingly avant-garde Tapas 24, now seen as very año pasado. ‘A tourist trap,’ one of my local colleagues sniffed. Tickets has a four-month waiting list. It's also got a list of sponsors as long as your arm, from Estrella Damm and Riedel to Coca-Cola, Sharp, Lavazza and half a dozen media companies.

From the moment you arrive and see the dismembered penny-farthing in the window, you know you’re in for a performance. Indeed, the menu tells us the whole affair is an ‘Adrià Entertainment’ presented by the ‘Tickets Theatre Company’. It all seems rather over-produced, and we’re just beginning to be dismayed by the paucity of the wine list (short and unimaginative), when something wonderful happens. The food arrives.

First, the spherified olives. Spherification is the first trick you learn at molecular cookery school. Invented by Ferran Adria 10 years ago, it’s an alchemical process by which a solid is liquified then re-formed into a sphere when suspended in a calcium bath.

When done to an olive it produces a thing looking very much like an olive but whose greenness is somehow greener, as if we’re suddenly in Technicolor, whose texture (they explode on your tongue) is like cooled, molten salted honey, and with a flavour of such delicate salinity and umami meatiness that it’s like eating the first olive ever.

Then we’re entranced by the ‘Edible cocktail’ a slice of Granny Smith marinaded in beetroot juice and fennel, an appley crunch releasing a delicious cool draft on the palate. Then cod crackers, crisp saltiness and a slow-developing, intense flavour of fish.

The oysters have a lovely smokiness and concentrated taste of the sea, and the ‘pearl’ – spherified wakame seaweed – detonates deliciously. Then there are the air baguettes, little wands of hollowed-out loaf wrapped in pata negra ham, and mini-air-baguettes filled with foamed manchego, and anchovies on toast with tomato and fake scales of edible silver. Then cumin-marinaded 6-hour pork which is so melting it has to be scooped up in your fingers.

A mild disappointment was lobster with pimento sauce, fine and picante but lacking in the surprise factor that had everyone flocking to Rosas in the first place. This is the law of diminishing returns: you approach every dish expecting fireworks. There’s no place for the merely delicious.

The puddings are fun, delicious, slightly dated (any dish with a self-basting plastic pipette...), but still the flavours have us guessing – was that verbena with the coconut ice cream?

Tickets is a mini-Bulli, a kids’ version of the molecular Mecca, cheaper, faster, slightly easier to get a table, with a wine list that is frankly unchallenging. What I loved about it was the exuberance and the lack of cynicism. Everything’s done with a knowing wink, but it’s an inclusive joke (pace the sponsors). I get the feeling it could only work in Barcelona – that Londoners would regard it with ennui and a raised eyebrow, thinking they'd seen through it and not realising the joke is that it's already been seen through. And so the whirligig of irony runs round and round. The crowd’s interesting, definitely not the hipster bunch it would attract in Shoreditch or Clapton, rather more office workers and hen-parties. The room erupts into Happy Birthday at one stage, as staff bring a cake and candles. Very uncool, and rather sweet. As one of my party said, ‘you can only do this sort of thing if your second name’s Adrià’.

The bill for four with two bottles of wine, and four glasses of liquoreux, came to just shy of €300. 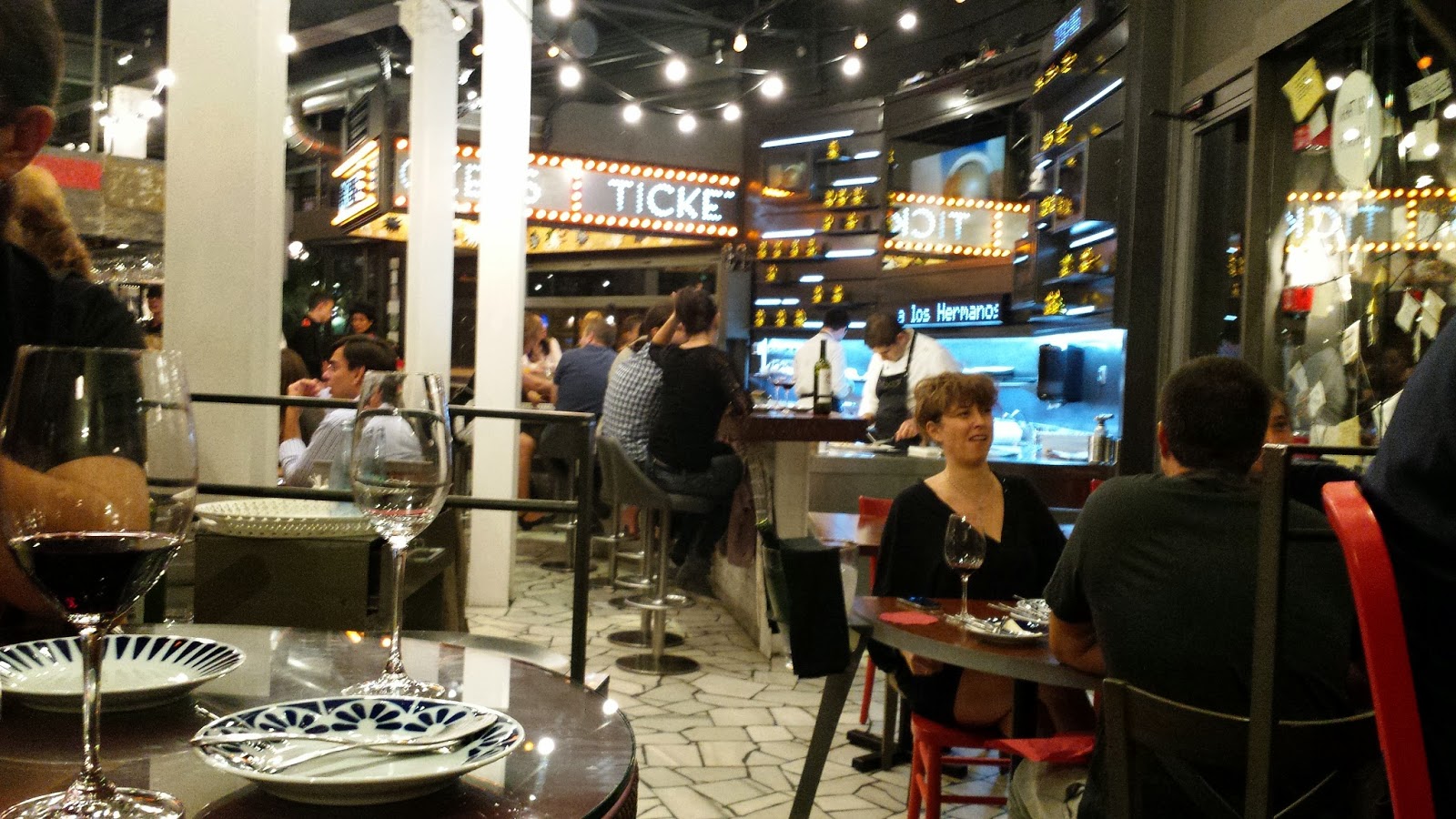