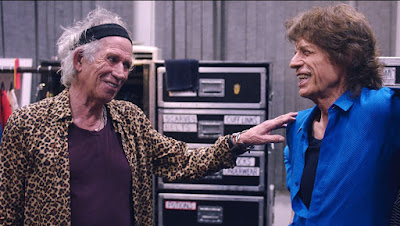 Olé Olé Olé tells the story of the Rolling Stones’ América Latina Olé Tour this year, which culminated in the historic free stadium gig in Havana, the first visit by a western rock band after decades of isolation. As a rock movie it’s a conventional, access-all-areas look at a few weeks in the life of the supra-national juggernaut that is the Rolling Stones on tour – the planes, the motorcycle outriders, the “madness”, the  bonhomie (Mick: “what’s that word for bonding? That’s what we do in rehearsal”). The concert footage is amazing, and there are some wonderful aerial shots, of Lima (Keith: “Lima. It’s got enormous since I was last here in 68”) and Rio. The production values are top notch. It’s mercifully short on rock n roll clichés, if you ignore the fact that the concept of the “Rolling Stones” is one gigantic cliché in itself – the band as brand. Even the antimacassars on the plane are splashed with the tongue logo.

I’d gone along to the premiere at London’s Curzon Mayfair for a few glasses of Argentinian and Uruguayan wine – the excellent Argento, and Bodega Garzón, who sponsor the London showings of the movie – expecting to be entertained. The Stones have been around a while after all (“Please allow me to introduce myself …”), and they know how to put on a show. To my surprise, I was gripped.

Considering this quartet of multi-millionaires has been peddling the same old rock and roll for more than half a century, they come across as remarkably uncynical.

It’s often moving. There’s a sweet moment when a Cuban man collapses on the kerb in tears. “He just saw Mick,” his wife says with a gentle, understanding smile as he rubs his face. It’s hardly an exaggeration when someone - Keith, or Charlie, or Mick, or Ronnie – says of Cuba, “the Stones are a religion here”.

Jagger and Richards are the wizened prophets at the centre of it all. The latter, piratical old Keith, has been outspoken about the fact they haven’t exactly got on like a house on fire over the last decade or so, and you might wonder how they manage to seem so relaxed together in the few set-piece chinwags they have for the camera. I guess they rub along like brothers nowadays, or like the French and the British: respect, antipathy and mutual interests blended and buffed over the years into something like affection.

Then, in the corner of a dressing room, they break into a spine-tingling rendering of Honky Tonk Women, Mick crooning like a gypsy, his skinny little legs shaking out the rhythm, Keef bent double over his guitar. It brought cheers from the audience. If that was staged, then those two are better actors than I thought. There are other delicate touches that could even be accidental. In one classic backstage shot in Havana, the band’s just about to go on and the noise from the crowd is deafening. You see Jagger in his red shiny jacket (“I’m a man of wealth and taste”) actually hesitate, and for a moment he looks vulnerable.

I’m a Beatles man myself (I always suspected the Stones were more businessmen than musicians) but those songs – Satisfaction, Sympathy, You Gotta Move, Start Me Up, Wild Horses – are inscribed on the synapses of all of us. And when Jagger struts around the vast stage belting them out, the very screen bulges and pulses with the atmosphere.

As to getting a look into the psyches of the actors in this lengthy drama, that’s beyond this director’s remit. All I know is, the Stones are certainly enjoying themselves (“It all looks very festivally out there,” Mick drawls as he looks at another 50,000 fans revving themselves up), and it’s also clear they’re moved by the adulation. From the Argentinians, for example, who if they’re old enough remember what it was like under the generals, when they weren’t even allowed radios. “This would have landed us in prison,” says one grizzled Rolinga (that’s what Stones fans call themselves there). “This is profoundly touching”, Jagger’s says, simply. Music and dance is everywhere: wherever they go, the boys are serenaded. There are scissor dancers in Peru, mariachi bands in Mexico (Keith: “Mexico is a big guitar country), tango, samba, rumba and cha-cha, tribute bands in front rooms and kids singing in the street. “It’s humbling,” Jagger says, and I can see what he means – there’s the very strong impression that the Stones are welcomed as equals, not as rock stars (although there’s a devil of a lot of screaming when the lights go down, much of it by middle-aged men). And the music is fabulous. I’ve never heard Wild Horses sung with such passion as Jagger coaxes out of his voicebox.

What more do you want? Is there any more? If you’d asked me before, I would have said I’d like some insight – something like Julien Temple did with Joe Strummer in the masterful Clash documentary The Future Is Unwritten. But I don’t think the Stones go in for that sort of thing. If it was McCartney, there’d be soul-searching. Bono would be irritating, Sting even more so. But the Glimmer Twins? They’re just a pair of raddled old buccaneers, doing what they do. “How can you stop rock and roll?” Jagger asks, and it’s purely rhetorical.