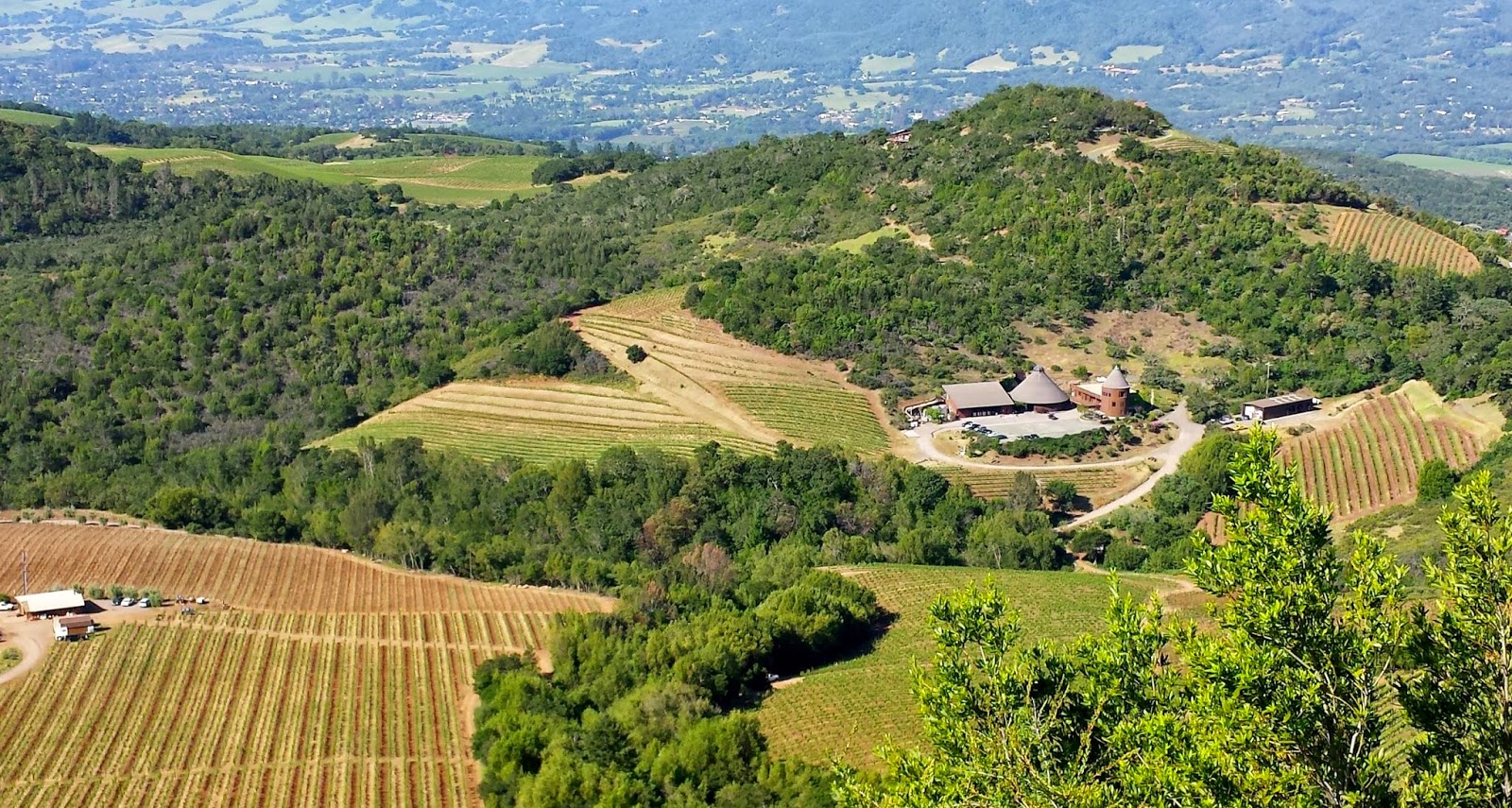 I spend a heady few days with the wonderfully diverse but close-knit group of entrepreneurs, growers and investors harnessing the terroirs of Sonoma's "newest oldest" AVA

Read the full article here
Posted by Adam Lechmere at 10:01 No comments:

Shining a pencil-thin beam into the machine: Philippe Dhalluin at Chateau Mouton-Rothschild

Philippe Dhalluin is in a very good mood this rainy January morning.

He has just been blending the 2014 vintage at Château Clerc Milon, sister property to Mouton-Rothschild, and he is describing it with that mixture of pride and caution that Bordeaux uses when it has a good vintage on its hands and wants to prime the critics without being accused of hyping it up. "It's good. We're confident about the quality," is as far as he will go.

He started his winemaking career in Peru, at the Tacama estate. It was expedient, he says. There were four posts advertised when he graduated from Bordeaux's Faculty of Enology in 1982: "Two in California, one in Australia and one in Peru. Of course, everyone else wanted to go to California or Australia." There’s another thing: in France, "C'est le Perou" means "It's fabulous", a nod at the fabled city of El Dorado.He is the managing director of Mouton-Rothschild, its sister estates Château Clerc Milon and Château d'Armailhac. He is also managing director of the other Baron Philippe de Rothschild properties: Opus One in Napa, Almaviva in Chile and Baron'Arques in the Languedoc.

As we know, Dhalluin found his El Dorado. He came back to Bordeaux, to the cru bourgeois Château Beaumont in 1985, and from there joined Patrick Maroteaux at Château Branaire-Ducru, his last job before being recruited by the Rothschilds in 2003.

Was running a first growth his ambition from the start? "It's the dream of every Bordeaux winemaker to run a first growth. They have such exceptional terroir, and we all know it's impossible to find a better expression of quality and character. To have the opportunity to vinify these grapes is an outcome for a winemaker."

It is indeed an outcome, and it's a typically low-key statement from the ever-courteous Dhalluin. There's something about him that sets him apart from his fellows, the elite group of first growth managing directors who bestride the wine world. He doesn't have the suave urbanity of Paul Pontallier at Margaux, for example, or the ferocious reputation of Latour's Frédéric Engerer; nor does he have the lineage of Jean-Philippe Delmas of Haut-Brion, scion of a winemaking dynasty. Pink-faced, suited and smiling, he looks more like a respectable family solicitor than the boss of one of the five greatest wine estates in world.


But beneath the understated demeanor is a pioneering talent. Maroteaux, who praises his "huge motivation", recalls how Dhalluin arrived at Branaire and immediately set about persuading him to embark on a €6-million ($6.8m) renovation. "We were the first to install different-sized tanks and the first to have a gravity-fed vat house. That was his idea."
Since joining Mouton 12 years ago, he has overseen a radical and comprehensive overhaul of the Rothschild portfolio. Indeed, his feet were hardly under the desk before he was presenting his plans to Philippine de Rothschild. Some €40m ($45m) later, ("and 66 meetings", he adds), and the rebuildings and replantings are still going on. There's the new vat room at Clerc Milon (completed 2011), and the transformation of Mouton including a vast gravity-fed vinification cellar, many new fermentation tanks (the smallest of which holds no more than 50 hectoliters), and an experimental vineyard that, when I visit, is still a gravelly wasteland.

"This is the future," he says, surveying the perfect rows of tank lids protruding from the oaken deck of the new building. "More and more precision."

Smaller tanks mean they can find "micro-zones" within parcels, vinify them separately, and become forensically exact as to which vines to favor. Attention to detail informs Dhalluin's every move. For instance, he has enough optic sorting machines, which work by taking high-speed photographs of grapes shooting by on a conveyor belt, to process the entire harvest of the 75-hectare (185-acre) property. But he often returns to manual sorting. "It allows more integrity in the grapes," he says.

If he's excited about designing his own winery, the experimental vineyard is also going to be interesting. There's about half a hectare to be planted – "not to Cabernet Sauvignon; maybe Merlot or Cabernet Franc?" – with a view to eventually working out how to "limit the use of pesticides and fertilizer – and put forward a new form of viticulture".

The idea is to be "experimental but not revolutionary". An estate like Mouton, Dhalluin suggests, is not the sort of machine you want to tinker with. So he welcomes experiments with organic viticulture at Opus One, where there is significantly less danger of rot, and at Clerc Milon, 70 percent of which is organic, but at Mouton things progress with circumspection. "If, as a result of [going organic], you lose 25 percent of the crop, well, you have to take full responsibility for that."

So the watchword now is caution. Dhalluin tells me he's reading Roger Dion's magisterial Histoire de la Vigne et du Vin en France des Origines au XIXe Siècle (the History of the Vine and Wine in France from its Origins to the 19th Century). It demonstrates the need for a cool head, he says.


"People then didn't have the same means we have. They had the time to observe, and cultivate. It shows you have to take a certain time if you want to do something. That's why I've delayed a year with the new vineyard – because when we plant, we plant for 80 years. You have to get it right."

This doesn't mean Mouton is standing still. Dhalluin sees progress as the gathering of knowledge; he wants to shine a bright, pencil-thin beam into the innermost workings of the machine. He's not interested in debating the merits of concrete versus oak – "vats are simply tools" – but in microbiology.

"The evolution of enology is not winemaking. The great evolution is the power of analysis." We now have the equipment, he says, "to analyse compounds that 10 years ago we barely knew existed, and if we knew of them, we had no idea how they worked". He cites the rogue yeast brettanomyces as an example; it was only recently discovered that it can live in vineyards as well as wineries. "The more we understand these things the better we are equipped to express our terroir."

It sounds as if he likes nothing better than to fossick around in the lab with petri dish and test tube but, of course, that's not the case. He's abroad a lot of the time.

"You're lucky to catch me," he said, when we spoke. "I was in Paris yesterday and tomorrow I go to Hong Kong."

He visits Opus One ("more or less as a consultant") four times a year, and gives nearly equal attention to Chile and Languedoc. Then there's the ambassadorial role – travelling to Shanghai, Taiwan, Hong Kong (and wherever else the ultra-high-net-worth individuals who constitute Mouton's market hang out) with or without his bosses, Julien de Beaumarchais de Rothschild and Philippe Sereys de Rothschild, the heirs of the late Baroness Philippine, who died last year. It sounds like a lot of administration and glad-handing. Isn't it galling – as you rise in your chosen profession, that you find yourself doing less of what you love, and more of the boring stuff?

Dhalluin laughs and murmurs about the importance of meeting the people and finding out how the wines are perceived.

"I have to do these things. To run the company is my job; making wine is my hobby."
Posted by Adam Lechmere at 09:50 1 comment: