Max Riedel and the Eucharist... but yes, the glass does matter 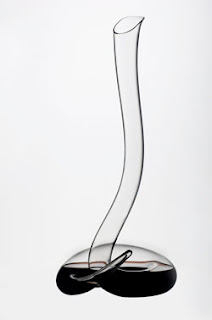 There’s always the whiff of humbug about the Riedel family. I’m not sure why: as anyone who has ever drunk wine out of a plastic cup knows perfectly, the glass is important.
Flick one of Riedel’s beautifully-turned glasses with a finger and you can hear the purity of the tone. Swirling your cru classé in the bottom of a tureen-sized Cabernet glass is sensual pleasure anticipated.
So I looked forward to a morning with Maximilian Riedel at Harrods. After all they make (with subsidiaries Spiegelau and Nachtmann) over 100 glass shapes and styles, and are constantly developing more. Do you really need a different glass for Pinot Noir and Cabernet?
So there’s something about the family that makes you instinctively put a protective hand over your wallet when you see them coming.

Perhaps it’s because they seem to have made such a science of the subjective, at the same time cloaking it in the language of the arts.
Maximilien is a small dapper figure with the large unblinking eyes of the evangelical (he’s the son of Georg, a Decanter Man of the Year and current head of the ancient Austrian company)
When he conducts a tasting it’s as a priest preparing the Eucharist. His English is fluent, precise and slightly hypnotic.
‘Our wine glasses are instruments.They are driven by human sense, not the drawing board. Draw near with faith…’ (I made the last bit up but you get the picture)
In front of us we’ve got a Pinot Noir glass, tulip-shaped, slightly flared at the top, a Syrah glass, tulip-shaped, no flare, and a Cabernet Sauvignon glass, big enough to drown a cat in.
‘Now please pour the Pinot Noir into the glasses. Now just swirl and sniff. Now we’ll take a sip…’
We do as we’re told – and we’re not given any chance to make our own minds up about the wine as Max’s voice intones the qualities of the wine, what we should be tasting as we test the three different glasses with three different wines.
Of course a blind test is impossible. Even if you were blindfolded and bound to your chair with a robot arm lifting the glass for you, you would always know which glass you had against your lips.
Riedel knows what it’s doing – the three we have are beautiful examples of the glassmaker’s art – perhaps my antipathy is the fact that the Riedel’s take themselves so seriously.
For the Cabernet Sauvignon – the excellent Napanook – Max brings out his piece de resistance, the Mamba decanter, named, God help us, after the world’s most deadly snake, a thing both obscene and sinister, like something Dennis Wheatley might dream up.
Max designed this for his 30th birthday, he said – ‘I wanted something to give away at my party’ but soon found a design fault in it: 'the wine stayed in the coils of the snake, as it were, and refused to come out.’
There follows a lot of guff about oxygen trapped in the hideous thing and how perfectly it aerates the wine. Stuff and nonsense: decanting the wine aerates it – it’s the contact with oxygen. I think it’s when a Riedel strays into the realm of art that it all begins to sound bogus.
But then he also speaks language we all understand. When I asked him whether glassmaking at Riedel was a science or an art, he stressed they didn’t have much patience with the scientists and preferred to work with the people who make the wine. So it’s instinct: which must be right when you deal with something so subjective. I’d be suspicious if he pulled out a spreadsheet.
He said, ‘Well, we have no research department. Is it instinct more than science? There are constant battles between doctors and scientists. Some say the tongue map exists, and some say it does not exist.
‘If we had anything to do with doctors and scientists it would be a never-ending battle. This is not objective: everyone in charge of their own senses.

'So for this reason we don’t hire chemists to work with us on new shapes – we work with the winemakers and the industry.’
And…and, mamba decanters aside, they make beautiful glasses.
For me, the major difference was in the Pinot glass. Its flared rim concentrates the aromas and gives each wine a sharper edge. The Cabernet glass was indeed perfect for the dense aromas of the Napanook, whose minerals and acids became overwhelming in the smaller Syrah glass and Pinot glass.
By the same token it was astonishing to note the way the Cabernet glass killed the nose of the Pinot Noir and the Syrah.
Here are my notes for what they’re worth. A tentative verdict: if you can afford them, buy a set of Riedel white glasses and a set of Riedel reds. If you can only run to one set, buy the Chianti Classico/GC Riesling glass. It’s good for both red and white and it’s a lovely but not ostentatiously weighty shape
Ponzi Pinot Noir, Willamette Valley
Pinot Noir glass
Nose: Precise, bright with earthy notes
Palate: Bright soft red fruit, good bright acids, juicy mouthfeel, mouthwatering soft tannins. The shape of the glass – the flared shape of the glass designed to cause an explosion of fruit flavour at the front of the mouth. It works. Good length
Syrah glass
Nose: slightly hotter, more alcohol, more earthy notes evident
Palate: soft and bright with more minerality, tannins slightly sharper than in the PN glass.There is more spice, and more green components – a whiff of green pepper
Cabernet Sauvignon glass
Nose: lost at first then after a few minutes developing grassy/hay aromas
Palate: still bright (this is a very good wine, after all) but the minerality is brought out more forcibly and do I get the impression the wine is hollower at the core, that the fruit drops off, as does the length?
Syrah
Wind Gap, Sonoma Coast 2008
£41.50, alcohol 12.5%
Syrah glass
Nose: powerful and attractive with spice and white pepper
Palate: Bright, sweet, spicy, some earthy notes, cedar, meat, very juicy, not great length
Cabernet glass
Nose: diluted as per the Ponzi, no concentration – no Syrah character
Palate: The slight bitter edge that I got from the Syrah glass is pronounced, the tannins dusty
Pinot glass
Nose: more concentrated, sweeter, the white pepper notes not in evidence
Palate: bitterness more pronounced, minerality comes out, fruit still evident but tannins sharper
Napanook Cabernet Sauvignon, Napa Valley 2005
Cabernet glass
Nose: very attractive spice, leather and smoke
Palate: very concentrated deep black fruit with gripping, chalky tannins, superb ripe fresh acids and lovely length
Pinot Noir glass
Nose: still superb but with an edge – it’s greener, darker and sharper
Palate: again, if this was the only glass I was tasting it from it would still be a lovely wine – but in contrast to the Cab glass there is an edge, the tannins are sharper, the acid has an edge
Syrah glass
Nose: still superb but also with the edge I see in the PN glass
Palate: everything is exaggerated – the tannins are sharper and even astringent, the minerality in the wine is brought out, there is more of a drying length
Posted by Adam Lechmere at 00:43 1 comment: