Winemakers can be restlessly inquisitive, constantly searching for new terroirs to explore. Big wine companies are the same, though for different reasons. A Burgundian, say, will have his eyes on Oregon, or New Zealand, for the challenge those regions present for Pinot Noir; a Bordelais might look to Napa (there are more than a dozen French winemakers working at the highest level there) to grapple with the novel challenge of too much sun. Where wine corporations are concerned, simply change the word ‘explore’ to ‘exploit’ and you have their raison d’être.

Gérard Bertrand works to a different scale. He is interested solely in his home region, the great swathe of southern France that is Languedoc-Roussillon. ‘I was born in the vineyard and my dream was always to reveal the terroir of the south of France,’ he says.

Bertrand took over the family property, the 60-hectare Domaine Villemajou in Corbières, on the sudden death of his father Georges Bertrand in 1987. Gérard was 22, and still playing rugby at national level (he continued to play for the next ten years, captaining his team, Stade Français in Paris, from 1992 to 1994). From the start he took his responsibilities seriously, ‘assuming the leadership in the region’ as he puts it. ‘Other companies are global and I have a deep respect for that, but my focus is here.’

He quickly established the Gérard Bertrand brand, and began to acquire properties. In 1992 he bought Domaine Cigalus in Bizanet and ChâteauLaville Bertrou in La Livinière, and ten years later he acquired what has become the company’s flagship, Chateau l’Hospitalet in La Clape, a winery and three-star hotel which is the centrepiece of the Bertrand philosophy of ‘l’art de vivre’ – the art of living.  The group now has 10 estates and more than 550ha of vineyard. It produces a bewildering array of wines, from the ten estate cuvées, to the top end Cigalus, La Forge and Tautavel – which retail at around €30 a bottle – the Grand Terroir range, the Art de Vivre range and others. He produces 1.5m cases, generating a turnover of €60m. It would seem he has conquered the Languedoc-Roussillon. Would he ever consider finding new terroirs outside the south of France? ‘No. My life and soul is here – I think we are continuing to develop what we have. I want to be the best in the region.’

In person, Bertrand is a commanding presence, the very type of the broad-shouldered rugby international, though slightly dishevelled, as if he is unused to wearing a suit and tie (‘I just wanted to lean over and straighten his collar,’ one female public relations executive told me after an interview with him). He works the international circuit, ever-present at trade fairs from Montpellier’s Vinisud, to Prowein and the London Wine Trade Fair. He is so used to giving interviews and explaining his mission to promote the south of France that there’s a tendency to lapse into inspirational jargon. ‘I feel like a missionary,’ he says. ‘My goal is to share with the consumer the lifestyle of the south of France: wine, gastronomy, culture and art, and then deliver the message in the cross – fraternity, peace, and love.’

‘The cross’ refers to the distinctive Bertrand logo, the four-armed Visigoth cross, which is beamed three metres high onto the outer wall of the new l’Hospitalet chai, and which according to the company’s literature is laden with significance, ‘…its four elements and its twelve points of the zodiac represent the perfect perpetual cycle of time and nature…’

While that might sound like new-age mumbo-jumbo, the Gérard Bertrand brand is rooted firmly in reality. It dominates the south of France, exporting to 100 markets worldwide and garnering a clutch of international awards. When Bertrand says, ‘In many regions and countries we have opened the market and created the south of France category’, it is not an empty boast. 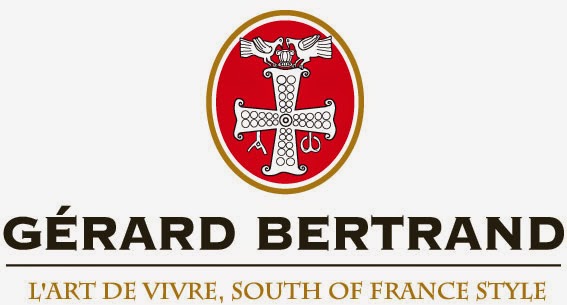 One gets the feeling he runs the company with an eye for the smallest detail (there’s no doubt he would far rather be in the vineyard or the blending room than at a trade fair). He tastes ‘more or less three mornings a week’ and is in the vineyard once a month through the year, and several times a week before and during harvest. He gives the same attention to his international markets, concentrating on North America and Asia, but excluding China at least until 2020, he suggests.

‘China is important and interesting but not for the next few years. They don’t have the knowledge and experience yet – they don’t recognise a label until it becomes a brand - and they are full of stock as they produce a lot of wine.

‘We can represent the future for them because they like the taste of the south of France, but you have to educate thousands and thousands of people.’

Bertrand returns again and again to the theme of education. Many winemakers are evangelical in their determination to promote their region, and he is no exception – indeed, his entire life is dedicated to demonstrating the potential of his many terroirs. Critics recognise this potential: three Bertrand wines were in the final listing of the UK’s Sud de France Top 100 competition, out of over 600 entered, with Château de Villemajou Grand Vin 2011from Domaine Villemajou– Georges Bertrand’s original winery – taking a trophy. At the 2014 Decanter World Wine Awards, Bertrand’s wines won several gold medals and two coveted Regional Trophies, for the Réserve Spéciale Viognier and a 1974 Rivesaltes which the judges described as ‘Wonderful stuff’.

Tim Atkin MW, who chairs the Sud de France Top 100, considers Bertrand ‘charismatic, passionate and deeply knowledgeable about his own region’ and ‘one of the key figures in the renaissance of the Languedoc-Roussillon.’


Size, scale and reach play a major part in the success of the brand. Bertrand bestrides the Languedoc-Roussillon like a colossus: his estates stretch from the recently-acquired Chateau la Sauvageonne in Montpellier to Laville-Bertrou in La Livinière; there are properties in La Clape and Boutenac, and another recent acquisition, La Soujeole in the Malepère appellation near Carcassonne. The terroirs are wonderfully varied in altitude and topography: Domaine de l’Aigle in Limoux is one of the coolest and highest in the region and produces restrained and elegant Pinot and Chardonnay; Domaine de Cigalus in Boutenac is more Mediterranean and planted to Grenache, Carignan and Caladoc as well as international varieties. There are few grape varieties Bertrand doesn’t source.

So there is reach, but the scale of each estate is manageable – production is almost artisan for the smaller estates. There is no irrigation (‘the roots go deeper and reveal the terroir’), and 300ha of the portfolio are now biodynamic: ‘The philosophy is to be sustainable at least, and then organic, and then biodynamic,’ Bertrand says, adding that he follows the biodynamic calendar where possible. This annual calendar – as most famously set out by Maria Thun and her son Matthias - uses lunar and solar cycles and planetary movements to advise which periods, either ‘fruit’, ‘flower’, ‘leaf’ and ‘root’ days, are best for different operations in the vineyard or winery. ‘We respect it for the top wines, and only bottle on a flower or a fruit day. For the others, we use it at the end of the tasting to see what kind of day it is.’

Another facet of Bertrand’s philosophy (he uses the word frequently to describe his view of winemaking) is a clear focus on the taste and style of the different terroirs. ‘To reveal the terroir you need to feel it. When you suck limestone you get a taste of mineral  and salt, from silex you get iron. And of course, to understand the terroir you need to work on it and spend time on it.’

This focus is not only for the higher-end terroir-driven wines. Swirling his basic-level Picpoul de Pinet in his glass – a wine which sells for around €12 – he is still concerned that it should deliver some sort of typicity. ‘Why do I like this? It’s an easy wine to understand. It’s fruit-driven, it has minerality, it’s crisp, you salivate and you need another glass. It’s not a complex wine but it has the taste of Picpoul – you can feel the taste of the grape.’ The same goes for the best-selling rosé Gris Blanc. ‘We’re looking for the taste of Grenache Gris. It’s a modern wine with an old traditional varietal.’

This surely is part of the ethos – to take what is traditional about the south of France and turn it into something modern, approachable and marketable. Revealingly, Bertrand chooses to answer another question. ‘Twenty-six years ago we were in three markets, and now we’re in 100.’

There is a relentless focus on markets: after all, one man’s mission to educate is another man’s brilliant salesmanship. At the massive new chai at L’Hospitalet, capacity is increased, but Bertrand says that is not the most important aspect of the building: ‘We needed to have a very modern and attractive winery to align with the market’ – and to have more storage space for the library of past vintages that he is amassing, in order to demonstrate the ageworthiness of his wines to future generations of consumers.

Bertrand is at his most eloquent and enthusiastic when discussing ‘the soul of the appellation’, as he puts it, and at the heart of it all is Corbières, where he grew up. Of the Corbières Grenache Syrah Mourvèdre, he says, ‘This is my origin, the place where I was born. It is a beautiful place. I love the story of Corbières, it’s one of the most exciting places in the world. It’s alchemy, to get such juice from such a hard landscape.’

When one considers how long wine has been made in this region, Bertrand’s mission is in its infancy. He has 39 vintages under his belt and is not yet 50 – ‘I have a good level of energy and I resist stress’ – does he feel there is a lot more work to do?

‘My goal is to see Languedoc-Roussillon recognised as a Grand Cru, to be on a level with the best in the world. I’m very happy with what we have done in the last 20 years, and there are a lot of things to do in the next 20. But we’re not in a rush.’