The full mojito...the weird and wonderful wines of the Scholium Project

‘This is not a tasting,’ Abe Schoener says, opening his laptop, which has a death’s head motif on it – not the Scholium logo but the Alexander McQueen grinning skull. Schoener, burly, bookish, bespectacled (with a passing resemblance to the actor John Goodman), is a philosophy teacher-turned-winemaker, and he’s at the Sampler wine shop in South Kensington to explain his Scholium project – and to make every effort NOT to explain his compelling wines.


Scholium is hard to pin down. It’s best described as an experimental winery, based in the Tenbrink Vineyards in Suisun Valley,  Solano County, east of Napa City. As far as I can gather the operation is run almost entirely with devoted interns. One told the New York Times that working with Schoener was akin to falling in love.

Another intern, journalist and Decanter writer Courtney Humiston, who helped on the 2011s and continues to work in the vineyards, said, 'Abe is a great teacher, but what you learn most from working with him is that we are all students and the wine is the teacher...the vineyards, the vines, the microbes, the yeast, the mysterious transformation that takes place during fermentation. We can only seek to understand; it's not something you aim to master.' They all talk like that at Scholium.


Sourcing grapes is going to get more difficult, Schoener says, as this ultra-boutique style catches on. ‘Many of us are having success in using unheralded vineyards and unheralded grapes like Petite Sirah and Verdejo. There’s more competition for vineyards now.’

If you’ve been bruised by the "natural" wines kerfuffle (we’ve had it bad in London), Schoener might make you twitch, but he insists he's not a "natural" winemaker. His wines are unracked, unfined, unfiltered, untopped-up (which can lead to a sherry-like growth of flor). Fermentation is uncontrolled (the Choephoroi Chardonnay 2008 took two years to ferment), wines are never inoculated, SO2 used only rarely. He makes “natural” winemakers look like laboratory technicians, but he says, ‘most people expect me to be an exponent of natural winemaking but I’m not.’

His tastings are eccentric, to say the least. He lectures from his laptop while the wines are poured. He won’t allow spitting: ‘You are to drink all the wine, and you are to drink only the wine.’

Schoener is the type of philosopher-winemaker that only California can produce. A fierce admirer of Napa Chardonnay guru John Kongsgaard, under whom he trained, he talks about the metaphysical – ‘that unseen realm’ – and uses words like ‘heuristic’ (no, me neither). He brings in the 14th century Arab philosopher Ibn Khaldun. Indeed, he quotes him at length, warning us, ‘I’m now going to quote him at length’.

It might sound rather too rich a mix, but it’s leavened with disarming asides and tangents (on his no spitting rule – ‘I was drunk halfway through the last lecture’). The audience, moreover, is loving it, full of questions. There seem to be a lot of Americans – South Ken is brimming with diplomats and other rich expats – and they’re more attuned to this sort of thing.

‘I’m not going to talk about barrels,’ Schoener says, and keeps his discourse to the general rather than the particular. Winemaking is all about ‘preservation in the face of spoilage and preservation is achieved by the husbanding and management of microbes that would cause spoilage under only slightly different circumstances. So we as winemakers spend our lives hovering on the edge of disaster.’

What surprises you about the wines is the peculiar vividness of the flavours – it’s as de Quincey, say, or Aldous Huxley might experience them. So you don’t just get cigar box cedar notes, but a Siglo V on a balmy Sonoma evening; that’s not mere mint or spearmint in the Prince in his Caves, but the full mojito, complete with garnish and paper umbrella, and who knows, handed to you by a beautiful mixologista in white shirt and black tie. Tasting them makes for an intense experience – rather like looking at a minutely detailed canvas. You can’t appreciate the whole unless you step back and take a breath.

The ‘tasting’ was topped and tailed with a couple of grower Champagnes -  David Leclapart l’Amateur and one of the Sampler’s top grower sellers, the André Beaufort, and a Collet de Bovis from Bellet in Provence. Fine wines but after the technicolor delights of Schoener’s wines they seemed very much in a minor key and I couldn’t think what to say about them.

All the wines are available at The Sampler. It’s Scholium’s first London listing – the UK is now its 4th largest market: New York is strong, as is Chicago, and he’s just sold some to Japan. ‘My wines are out of place in the US,’ he says. The Sampler has had them since October, manager Ben Slater tells me, and they sell out. ‘I can tell you that certain current wines have been impossible to keep up with demand for, especially given the small volumes available. With this in mind, I am confident that Abe will increase our allocation.’ 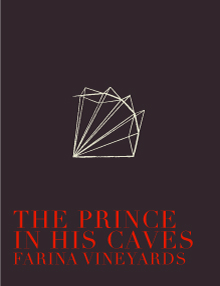 Choephoroi 2008
£42
300 cases
14.5% alcohol. Severely botrytised Chardonnay – Schoener said ‘the grapes were rained on and turned into slime by the botrytis’. The skins were broken down but so fast that there was not enough spore activity to suck out the moisture and sweeten the juice. Fermentation took two years, with 5-10 gallons of wine lost in each barrel, flor-like growth in airspace. The nose is cabbagey but not disagreeably so. When that clears, there is more oxidation, composted tea bags, faint and sweet odours of rotting vegetable matter, then honey and tropical fruit – lychee and kiwi. Complex, powerful tannic acidity, sharp peppery flavours of coriander and rocket, lovely gentle honeyed length. Excellent and would go beautifully with robust seafood. 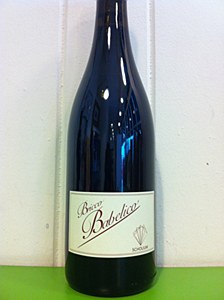 Bricco Babelico 2009
£42
Petite Sirah from Tenbrink Vineyards in the Suisun Valley,  Solano County, east of Napa City. About 160 cases
16.25% alcohol (the 08 was 17%, a Sampler staffer tells me proudly)
Baked earth nose with hot wet stones. Great sense of controlled power on the palate: christmas spice (clove and cinnamon) and sour cherry, fragrant plums and good sweet ripe acidity. Reminds me of Valpolicella Ripasso (are there raisined grapes in here?). Fine tannins tending to dryness for a young wine, some juice left but there won’t be much in a few years time. No burn from the extremely high alcohol, overall soft, dense length. Drink with rare game: grouse, venison. Good though would wonder about ageability of those tannins.