Kareem Massoud shrugs a shoulder when I mention how the Californians tend to dismiss New York wines. ‘They would, wouldn’t they?’ he says. Massoud is the winemaker and owner of the excellent Long Island winery Paumanok; he and half a dozen of his east coast colleagues are showing 70-odd wines at the London Wine Trade fair (or village fête, which is what this truncated event has come to resemble). Still, I wasn’t complaining. Everyone’s relaxed, you can get to talk to the winemakers, and you can taste and take notes without being jostled by fellow-travellers. 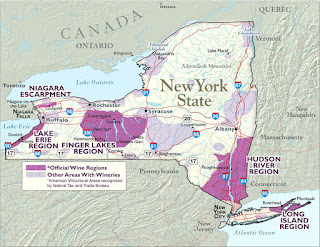 I’ve never been to New York State wine country. I’ve hardly ever tasted their wines. We don’t get to see them in the UK, really. They enter a handful of wines for the Decanter World Wine Awards every year, and win a few bronzes, perhaps a silver medal. They're just not very visible.

So it’s been an education to see their range (and Virginia as well, of which more later).

New York State sits between the 38th and 48th parallels – the same latitude as most European wine country (Bordeaux is on the 44th parallel, southern Spain goes down to the 38th). It’s a region cooled by vast bodies of water – the Atlantic to the east, the Great Lakes to the north and west. Soils are deep and well-drained, varying from the slate, clay, sand and silt of Finger Lakes to the sandy well-draining soils of Long Island.

The Finger Lakes region is the oldest and best-known – for its Rieslings, then there’s the Lake Erie region to the west, Hudson River above New York City, and Long Island, its producers concentrated on the two forks at the east end of the island.

New York State is a huge region, second only to the behemoth California in US wine production, with some 1500 growers and 309 wineries in nine AVAs.
The list of grapes farmed is long, from the recondite (Baco Noir, Chancellor, Marechal Foch, Valvin Muscat, Catawba) to international staples (the Bordeaux varietals, Chardonnay, Gewurz, Pinot Noir, Riesling).
If you want to find the wines in the UK, the best importer is Wine Equals Friends, which lists around 70 wines. Most of them are on-trade – a few dozen restuarants around the country, including some top names: Arbutus, The Glasshouse, Hakkasan, Hedone, Hix Mayfair, The Modern Pantry, Pollen Street Social, Gidleigh Park, Nathan Outlaw, the Seafood Restaurant, Padstow and others – including of course the Vineyard at Stockcross, which has the most comprehensive American wine list in the country.
The wines aren’t cheap – hardly any clock in at less than £15, with the average seeming to be £18-25, and the big icon reds and whites hitting £40-45. For the on-trade the wholesale price starts at £18-odd, so on wine lists you’re going to be looking at £50-60 bottles at least.
It was a fascinating tasting, every wine a pleasure, none that I wouldn’t recommend. If you take as the benchmark question, Is this the best expression of this grape, for the region and the terroir? Then I’d say the Bordeaux blends stand above the rest for their complexity and finesse. The reds seem to me to bridge the Old and New Worlds – they have elegance and precision along with exoticism. Tasted blind, you’d say unmistakably New World.
The Rieslings are lovely, but in some I thought the sweet aromas on the nose promised much, but the follow through would be slightly dry. Often the acidity didn’t dance on the palate alongside that lemony fruit, but fell to a dry shortness.
This is only a snapshot. I only tasted one Pinot and didn’t think much of it, but that’s hardly representative. I didn’t have time for the Chenins (I would have loved to see them) or the Chardonnays, the ice wine, the late harvests, the Gewurzes… what a cornucopia.
New York (and Virginia) play second fiddle to California, which has the market and the reputation, and the bombast. And as the Californians find more and more elegance in their Cabernets, as those reclusive hillside growers shake the dust off their boots and make a bit more noise about their wonderful Mountain Cabs, New York’s not going to find the going any easier. Can they find a market in the UK? I don't know - we've got a blind spot when it comes to American wines.We just don't get them, in more ways than one.
Riesling

Red Newt Cellars, Sawmill Creek Riesling, Finger Lakes 2011.
This winery produces around 400 cases a year. Interesting grassy aromas and dense petrol notes on the nose. It gives an impression of a serious wine, mineral, elegant and light, with flavours of cut pear, hints of honey and aromatic citrus.

Paumanok, Cabernet Franc, North Fork Long Island 2011
2011, Massoud says, was one of the most challenging he’s known, with heavy rains from mid-August to harvest, disease, rot and other horrors to cope with. So if he can make Cab Franc like this in a bad year… it has lovely bright fruit on the nose, almost Grenache- like in its juiciness, and good powdery tannins which burst refreshingly on the end palate. A pretty, charming wine.

Palmer, Cabernet Franc, North Fork Long Island 2009
Two and  half years in French and Hungarian oak
Powerful  nose with earth and (dare I say it?) a bit of brett (they hate any mention of that, these New Worlders. Miguel Martin, the Spanish winemaker, sticks his nose in the glass) but this is fine, lending a sharp forest-floor tang. Red plums, damson and leafy bramble on the palate around dense, chalky tannins. Very good

Palmer Merlot, North Fork Long Island 2009
This superlative Merlot has the same earthiness on the nose as the Palmer Cab Franc, with sweet cooked plum and soft red fruit – raspberries and sweet balsamic – on the platate. Superb, youthful, with grippy, supple tannins. (Martin, winemaker, see above, describes them as ‘elastic’, which is spot-on – elastic implies higher tension than suppleness.) Excellent.

Paumanok, Assemblage Bordeaux Blend, North Fork Long Island 2010
35% Merlot, 33% Cabernet Sauvignon, 21% PV, 11% Cab Franc
16 months in oak, 30% new French
Blackcurrant, damson and dried plum nose, then the Petit Verdot giving pot pourri and aromas of quince paste, then (complexity!) (h)erbal notes. Palate has fresh raspberry, red cherry and red plums, and some cinnamon, coffee, all set off by fine tannins that carry through to a sharp, food friendly finish. One of the best I’ve tasted from the region.
Posted by Adam Lechmere at 14:16