‘The vines drink stone,’ Fernando Gonzalez says, surveying his vertiginous vineyards. The Mencia here in Ribeira Sacra grows on terraces built into 85% slopes –roots forge their way through slabs of slate and schist that look as if they wouldn’t sustain lichen, let alone vines. Hence the hyperbole. The topography of Ribeira Sacra is not the least remarkable thing about this isolated, mountainous DO in the centre of Galicia. Its history too is extraordinary. While there have been vines here for centuries (the Romans made wine here, as they did over much of Spain), and Gonzalez’ terraces look as if they have stood for many decades, the present vineyards in fact are no more than a generation old. Once covered in terraces, over the last 80 years the hillsides were abandoned; the Civil War and increasing rural poverty were to blame, Gonzalez says. All the skills of the previous generations were almost lost – ‘between me and my grandfather there is no inheritance’.

But 30 years ago he gave up his job in banking and mobilised his family, clearing the forest and revealing the crumbling terraces, which they rebuilt by hand, stone by stone. That was on the south side of the River Sil – the northern bank is untouched. ‘Thirty-three years ago, this side of the river looked like the opposite bank,’ Gonzalez says. He’s pointing to a densely-wooded hillside; looking closely it’s possible to see the remains of terraces amongst the dense green foliage. Gonzalez found vines gone wild, winding round scrubby oaks in symbiotic harmony. He took cuttings, identified them, and if they were viable, used them as the base for his replantings. He had to be careful though – previous generations had favoured vigorous but uninteresting varieties like Palomino, and he wanted only the native grapes: Mencia, Trousseau (called Merenzao here), Brancellao, Treixadura, Godello and Albariño, amongst others.

Gonzalez’ property, Adega Algueira, is one of the most renowned in Ribeira Sacra. The wines are fresh, structured and light, their profile exactly suited to the wine-drinking public’s taste for restraint. The major UK importer Bibendum, which lists half a dozen of Gonzalez’ wines, finds them ‘truly stunning’. Ferran Centelles, formerly of El Bulli and now working with the restaurant’s founder Ferran Adria on his new educational foundation, called the Cortezada 2011, a blend of Godello, Albarino and Treixadura, ‘singular and extraordinary’.

Centelles is a Catalan sommelier of wide experience, but he professed himself ‘incredulous’ at the ‘heroic viticulture’ of Ribeira Sacra. It is a landscape which demands much of its winemakers. Gonzalez himself, a charming man, with the slightly  wild demeanour of the zealot, has devoted his life to the cause while retaining his sense of humour. ‘It’s cheap to work the land here,’ he says, ‘because you’ve got no alternative but to do it yourself.’

A few miles east along the Rio Sil, in a region where the export of slate was the prime industry, lies A Coroa, another property that is at once ancient and modern. The first winery here dates from 1750, but was abandoned some 100 years later. The present owners bought the land in 1999, and re-established the winery in 2002.

A Coroa produces four highly-regarded Godellos under different vinification regimes – the Godello Lias for example spends four to five months on lees – on slate and schist soils. Godello has been reclaimed in Galicia, by dint of the hard work of producers like A Coroa, Algueira and – further east still in Valdeorras – Rafael Palacios. The younger brother of Alvaro Palacios of Penedes, Rafael makes wines under the cultish As Sortes label, and is convinced of their ageworthiness. Jancis Robinson MW agrees – she recently tasted Palacios’ superbly concentrated 2011 and recommended keeping it ‘at least until the end of the decade.’

Winemakers are opinionated, and the debate about the ageing properties of the two great white grapes of Galicia, Albariño and Godello, will live on long after the wines themselves have turned thin and brown. Fernando Gonzalez, for example, reckons acidity is key. The stony slate and gneiss soil of Ribeira Sacra, he says, is ideal for supplying the freshness and acidity that will ensure endurance, whereas the richer soils of Valdeorras can create ‘a problem with acidity.’ Palacios would disagree.

Acidity is much more of an issue in the coastal Rias Baixas DO. Galician topography is very varied, as evidenced by the radical differences between the central DOs  – Ribeira Sacra and Valdeorras – and the widely-spread Rias Baixas. The western coastline of Galicia, where the four  sub-regions of Rias Baixas lie, is made up of a series of deep, funnel-shaped inlets which thrust inland from the Atlantic. The land is low-lying, ocean-influenced, more humid and cooler than the central regions.

Rias Baixas was created a DO in 1988, but the production of wine here has changed little over the centuries. To combat the damp atmosphere vines are trellised on the pergola system, stout granite posts a metre and a half high, holding up a roof of shoots. Production is fragmented amongst thousands of tiny vineyards: there are 177 producers in Rias Baixas, but 7,000 registered grape growers farming 4,000ha of vineland. ‘It’s pretty low-tech,’ Andrew McCarthy at Bodegas Castro Martin says. ‘This part of Galicia is very poor and rural.’

The peculiar nature of viticulture here encourages the growth of cooperatives like Condes de Alberei and Martin Codax, which have some 700 members between them and a dynamic export market (Codax partners with Gallo in the US, and is well-known in the UK, selling Albariño under both the Codax and the Burgans label). There is also a good deal of corporate ownership – companies like the Portuguese giant Sogrape, and fishing multinational Pescanova have stakes in the region.

With multitudinous growers, and often scant loyalty between grower and producer, experimentation can flourish. Rodrigo Mendez, a winemaker of exceptional and eccentric talent, sources grapes from a variety of remote vineyards, most within a hundred metres of the sea. His reds, from the indigenous varietals  Caiño, Espadeiro and Loureiro are renowned (a Pinot Noir is raised in a handful of barrels in his garage) and his whites are steadily gaining a stellar reputation. He also makes wines with Raul Perez, referred to by Robert Parker as a ‘visionary’; their Sketch Albariño is aged in bottle at the bottom of the Aurosa estuary.

Mendez’ methods are natural – foot-treading, no filtration, no fining, wild yeast fermentation, little temperature control – but his wines are sophisticated, beautifully structured and made with a sharp eye on international markets. They attract the enthusiastic attention of Bibendum and Spanish specialists Carte Blanche, as well as distributors in the US, after glowing reviews by Neal Martin on Robert Parker’s website.

While winemakers like Mendez champion a wide range of local varieties – Galicia has 60 indigenous grapes – it is Albariño which dominates. This is partly for its international appeal: the wines are fresh and easy-drinking, absolutely in tune with current style trends. But specialists also point to its complexity and ageworthiness.

One of these is Vicente Cebrian, the owner of Rioja’s Marques de Murrieta, whose  C16th family estate is Pazo Barrantes in Salnes,  the central DO of Rias Baixas. Salnes produces 99% Albariño and Cebrian loves to demonstrate the grape’s possibilities. He believes eighty per cent of Albariño in Rias Baixas ’is released too early’, and points to his vibrant 2000 Pazo Barrantes as an example of the way it can age with elegance and grace.

Aged Albariño is something the public isn’t quite ready for, McCarthy says, but  a glance at Bibendum’s figures for Castro Martin demonstrates the health of the sector as a whole, with a 39% sales increase over the last four years. As the economic crisis in Spain grinds on, it is exports which keep this bodega and many others alive. McCarthy sends some 70% of his production abroad, with half going to the UK, and the other half to the rest of Europe and elsewhere, including five to 10,000 cases to the US and 12,000 to Australia. ‘If we relied on our domestic market then we would be doomed,’ McCarthy says.

Galicia is remote, historically isolated from the rest of Spain until the motorways were built a generation ago. Traditionally it has been a region of subsistence farmers – and to an extent it still is. Those pergola trellises may be ideal for keeping vines far enough off the ground to avoid rot, but they also free up the space below to grow hardy vegetables or graze livestock. The crisis is still felt here. ‘Those who most relied on the domestic market have felt it hardest,’ McCarthy says. The result of falling domestic sales has been a surplus of grapes and a drop in prices – small growers have no compunction about offloading grapes as cheaply as possible. 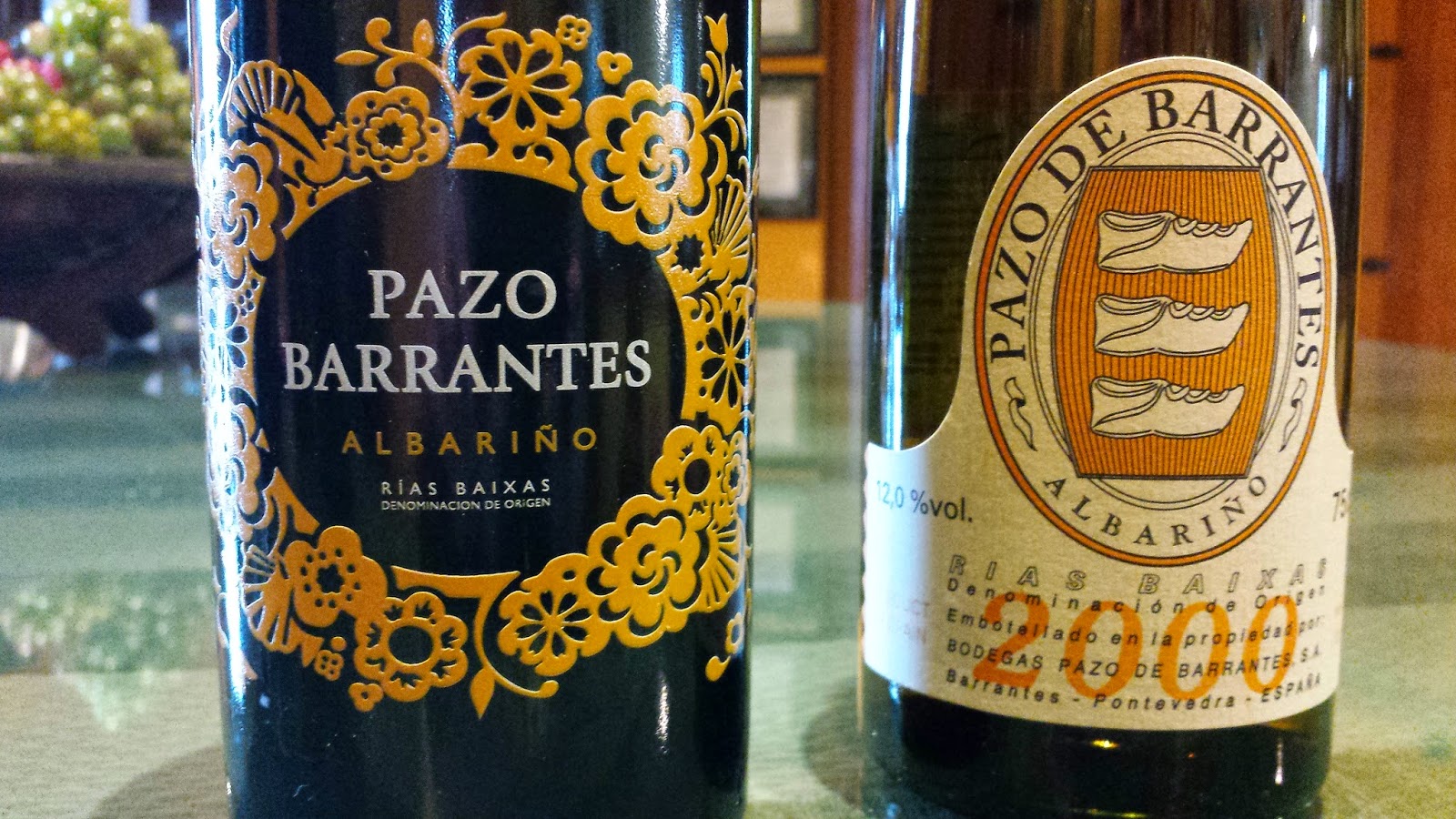 There have been failures – Rias Baixas’ 177 wineries were 200 a few years ago – but there were no ‘constructor’ wineries (those built on shaky economic foundations with the proceeds of the building boom in the south of Spain) in Galicia, as there were in Rioja and Ribera del Duero, so the fall has been less severe.

The focus is now on export, to the rest of Europe and the US, and in this, Galicia ‘can be counted a real success story’, Stuart Grundy, Bibendum’s buying director for Europe says. He attributes this to the global interest in Albariño, particularly Rias Baixas, ‘but now the lesser-known regions are channelling their energies that way too. Most of the top wineries have strong sales in the US.’

The global movement towards restraint applies to reds as well as whites and Galicia’s climate is ideally suited to produce light, fresh and acidic reds. Mencia, which is best-known in neighbouring Bierzo DO, works particularly well in the hills of Ribeira Sacra. As does Trousseau, native to the Jura and loved by artisan winemakers from South Australia to Sonoma. Adega Algueira has a very fine example which sells out in France, Gonzalez says. The critics like it so much ‘they refuse to believe it’s a Spanish wine’.


Winemakers in Galicia face many hurdles: the hard-scrabble life of hillside growing, humidity, damp and rot, economic uncertainty. But – despite what the French may say – their uniqueness is their strength. The climate and topography (someone described it as like ‘a Mediterranean Wales’) is so singular, and so singularly suited to producing wines of finesse, power and longevity, it is very difficult to mistake the best Galician wine for anything else.

(Tasting notes to will be added in due course)
Posted by Adam Lechmere at 04:52